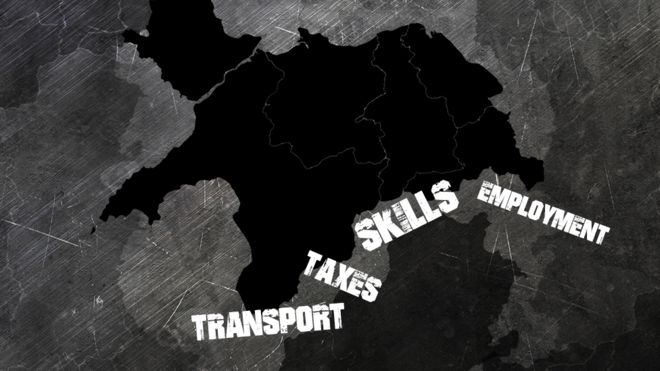 Devolving powers over employment, taxes, skills and transport to north Wales would boost its economy, jobs and productivity, a report backed by the region’s six local councils says.

The plans are in line with those for a Northern Powerhouse in England.

Those proposals, from the UK government, involve creating directly-elected mayors.

The north Wales plans were backed by the region’s six council leaders and chief executives over the summer.

Prepared by the umbrella body the North Wales Economic Ambition Board, the report describes the area as being “well placed” to acquire powers from UK and Welsh ministers.

After formal approval by council cabinets, negotiations will begin with the UK and Welsh governments for new responsibilities and extra funding, including a possible “Growth Deal” for north Wales.

Boosting the energy and manufacturing sectors are at the heart of the proposals, with a planned new nuclear power station at Wylfa, on Anglesey, being central.

In a report for senior councillors, Gwynedd’s cabinet member for the economy Mandy Williams-Davies said: “If funding is secured to deliver the action plan of projects, the region will experience sustainable economic growth and the value of the north Wales economy from £12.8bn in 2015 to £20bn by 2035.

“Such growth rate will generate at least an additional 120,000 new employment opportunities.”